The numbers in English must be spelled out in some official documents, such as bank checks and contracts. Spelling out the numbers provides a way in which poorly written digits can be disambiguated. This web page will help you to understand and use written numbers in English. 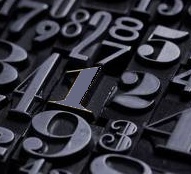 What does your
name mean?


When to spell out a number.
Small numbers which have one or two digits are typically spelled out. For example, "I have two brothers" or "I will be there in ten minutes". Larger numbers may be spelled if they are round or approximate, e.g., "almost two hundred people died". Numbers are generally not spelled out when they are exact, as in "Today, 137 people lost their life."

Example: There were many scientific advances in the first twenty years of the twentieth century.

Decimal and Fractional numbers
In most English-speaking countries, periods (.) are used as a decimal marker and commas (,) are used to separate groups of three digits before the decimal point. Numbers between 1000 and 9999 are usually written without a comma, but larger numbers or currency amounts generally use delimiting punctuation, e.g., 32,161 or $1,242.51. Many scientific journals insist that numbers with five or more digits should be written with thin spaces instead of commas, e.g., "32 161". Numbers which have a decimal point are pronounced with the point; 1.5 is pronounced "one point five"; 3.14 is pronounced "three point one four". Numbers expressed as fractions generally use cardinal spelling for the numerator and ordinal spelling for the denominator. Thus, 1/5 is pronounced "one fifth", and 11/12 is pronounced "eleven twelfths". Notice that the plural ending "s" is added to the ordinal number if the numerator is not one.

Pronunciation of years in dates
Years greater than 1000 are generally expressed in "hundreds". Thus, 1100 is pronounced as "eleven hundred" and 1900 is pronounced as "nineteen hundred". A year like 1942 is usually pronounced as "nineteen forty two" instead of "one thousand nine hundred forty two". This convention is not used for counting money because it is confusing. The term "nineteen forty two" when applied to money means $19.42, that is, nineteen dollars and forty two cents. The use of hundreds is modified when it can sound ambiguous. For example, 2005 expressed as hundreds would be "twenty oh five", where the "oh" is literally the letter "O", which represents the zero preceding the five to avoid pronouncing 2005 like 25 (twenty five). The context of date is very important for clarifying the meaning of these numeric expressions.