The Badlands of South Dakota are generally associated with great discoveries of fossils from the Cretaceous Period (145 to 65 million years ago), but the corridor between Washington, DC and Baltimore has one of the most important dinosaur fossil sites east of the Mississippi River.

Maryland during the Cretaceous Period

Dinosaur Park in Laurel, Maryland, located at 13100 Mid Atlantic Blvd, Laurel, MD 20708, is a 41-acre park featuring a rare deposit of fossils from the Cretaceous Period. The entrance of the park is landscaped with Cretaceous-era plants whose foliage can be best appreciated during the summer months.

Dinosaur Park in Laurel, Maryland preserves fossils from the early Cretaceous Period, about 115 million years ago. The park has no permanent restrooms, but there is a portable toilet on-site. There is also a small picnic area, but the park has no water or other amenities. No unsupervised access to the fossil site is permitted. No personal fossil collecting is allowed in the park. Digging or removal of fossils is prohibited. The fenced-in fossil area is only accessible during the 1st and 3rd Saturdays of the month when paleontologists and volunteers help visitors to interpret fossil deposits. More information is available at the Dinosaur Park web site.

Paleontologist Dr. Peter Kranz giving a lecture about the site

During the early Cretaceous Period, starting approximately 130 million years ago, a geologic formation consisting of sand, gravel and clay was laid down extending from southern Delaware across Washington, DC and into northern Virginia. Central Maryland was a flat coastal plain with winding rivers. Sharp bends in the rivers became detached and formed curved lakes called oxbows. Dinosaur Park is a remnant of one such oxbow. When the area flooded, logs and dead animals which drifted downstream into the oxbow became trapped and were covered with sediment when the water receded. The carcasses and trees embedded in clay slowly became the fossils that are found in Dinosaur Park today.

Maryland's "Dinosaur Trail" occupies the geologic region that runs parallel to the Route 1 corridor between Washington and Baltimore. The rock layers in this area are about 100 million years old and fall within the Early Cretaceous Period. They contain one of the largest concentrations of dinosaur fossils on the East Coast. Thousands of fossils have been found in the gray and red clays near Laurel, Maryland.

The name dinosaur, meaning "terrible lizard", was coined by paleontologist Sir Richard Owen in 1842. Just 16 years later, in 1858, workers in Maryland mining the Muirkirk iron ore deposits discovered fossilized bones that were later identified as belonging to a dinosaur. Christopher Johnston from the Maryland Academy of Sciences named the dinosaur Astrodon for the starburst pattern in the cross-section of its teeth. The species name johnstoni was later added to reflect Johnston's contribution.

Astrodon was a sauropod, a long-necked plant-eating dinosaur. Adult Astrodons were 18 meters long (60 feet) and weighed several tons. They reproduced by laying eggs. A thigh bone measuring six feet was uncovered in 1991 in the Muirkirk deposits which confirmed the enormous size of the dinosaurs. 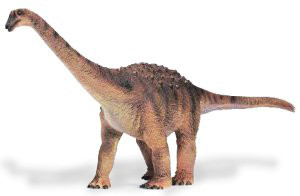 In addition to dinosaur fossils, Dinosaur Park is equally important for its preservation of fossilized plants. Flowering plants did not exist for most of the time that dinosaurs lived. However, the fossil bearing clay layers that were forming at Dinosaur Park contain some of the earliest flowering plants that appear in the fossil record. The majority of the plants in the Cretaceous forests consisted of cypress-like trees, medium sized tree ferns, ginkgoes, cycad-like plants, low ferns, mosses, horsetails and clubmosses. The swampy areas may have had some water lily-like plants. The garden at the entrance to the park has these types of plants.

The digging area where visitors can explore

Visitors are not allowed to take animal fossils from the premises, but for significant finds, the name of the person who found it is associated with the fossil. Large fossils are sent to the Smithsonian Institution.

A piece of a 115-million-year-old tree fossilized as lignite.

Visitors are allowed to take home fossilized wood (mostly crumbly lignite), which is a low grade of coal.

Learn about the Timeline of the Earth