A Fascinating History of Superstitions

Superstition has been defined as “a widely held but unjustified belief in supernatural causation leading to certain consequences of an action or event, or a practice based on such a belief.” In other words, superstition is an irrational belief in some object, idea or action as being the cause for luck, either good or bad. But where do these ideas come from and why?

Some people believe that if you spill salt, you have to toss a pinch over your shoulder to prevent bad luck. There are probably very few people in the world today that do not harbor at least one superstitious belief, regardless of their personality type. Early man looked to the sky, the animals or his gods for omens to help predict his future. It made no sense that luck was completely random and the universe provided no assistance in our fate. So, signs were seen in the sky and in nature and interpretations were made that were passed from generation to generation. Let's take a look at some of the most interesting cultures and subjects that attract the strangest superstitions.

Everyday Superstitions
Some of the most common superstitions revolve around numbers. Ancient Greeks, Romans and Egyptians all had strong beliefs around the number 13. While Greeks believed 13 was a number to fear, both Chinese and Egyptian folks believe it brings good fortune. To this day, there is a fear around Friday the 13th. Number 7, on the other hand, is almost always considered lucky. This stems back to ancient times when only 7 planets were visible in the sky, often seen as 7 gods and goddesses.

Another common superstition focuses on black cats, especially having a black cat cross your path. It was once believed that black cats were the companions of witches and demons and one would be cursed. Walking under ladders could represent the death awaiting a fellow in the ancient gallows and stepping on a crack could end one up in the depths of the underworld – those are the roots of these two well-known superstitions. And whatever you do, don't spill the salt or break a mirror or you might need to knock on wood or get the better end of a wishbone!

If the palm of your left hand itches, you will get some money, but if your right palm itches, you will meet some friends. It is bad luck to open an umbrella inside the house, probably because you could accidentally poke someone's eye. If you find a penny, pick it up; it brings good luck. Waste not, want not. Hanging a horseshoe above your front door with its ends pointing upward is supposed to bring good luck and protect your home. Finding a horseshoe or a four-leaf clover also brings good luck.

Professional Sports Rituals
It may seem strange to some, but athletes are some of the most superstitious people out there. Most athletes need to have positive social attributes to become a success with the media and fans, and people always find strange superstitions cool and interesting. In baseball, it is considered good luck to spit in your hand before picking up a bat or stick gum to your hat, while you are supposed to never speak of a no-hitter game while it is going on or you might jinx it. On a stranger note, All Star Baseball Hall of Famer Wade Boggs insists on eating chicken before each and every game and draws the word “chai” (life) in the dirt before going to bat.

In football, double numbers on the jersey is good luck, while it is bad luck to take on a new number when traded to another team. In basketball, you should wipe the soles of your shoes before the game for good luck. In the case of Michael Jordan, he believed that wearing his UNC shorts under his Chicago Bulls uniform was the only way to lead the team to 6 NBA Championships. You should never wear yellow when playing tennis and you should always carry coins in your pocket while playing golf.

Bet It All On Red
While every good gambler knows that winning is about skill and strategy, many can't help but believe there is a little luck involved and do all kinds of interesting things to ensure their luck is good. As casino games revolve around numbers, it's only natural for them to hold first place in terms of association to superstition. 666 may be the sign of the beast for some, but for roulette players it is also the sum of all the numbers on the table. Interestingly, not all cultures agree on numbers: 8 is lucky for Chinese Gamblers but 4 is very unlucky. 13 is still considered unlucky to most Westerners, but 7 is hands down the luckiest number in any casino, regardless of locale. Three sevens win in Blackjack, while 7 is a winning number in craps and there are endless triple 7 slot machines in every direction. 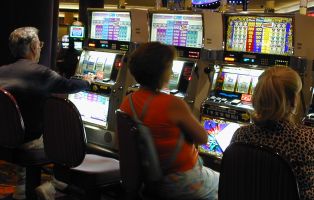 Other common gambling superstitions are more about individual personalities. Some believe entering a casino through the front door, especially if it is a huge lion's mouth (like the old MGM Grand), is terrible luck. As Kenny Rogers sings, “never count your money when you're sitting at the table.” Never gamble with the unlucky $50 bill; many casinos won't even have them in their cages. And whatever you do, always have a lovely “Lady Luck” blow on the dice before you throw them!

Happily Ever After
Love, marriage and buying a home all come with their own superstitions, dating back as far back as human beings existed. If you are in search of your true love, someone might tell you that one week after the full moon is the optimum time to fall in love. If you twist an apple stem while saying the names of all the people of the opposite sex you know, you'll find out the name of your true love when the stem breaks. Put wedding cake under your pillow to dream of your true love.

Once you have found him or her, there is a new barrage of superstitions to consider when getting married. If you want to have children right away, plan your wedding during the rainy season as a torrential downpour is a sign of great fertility. Be sure to break a glass, as the number of pieces it breaks into signifies how many years the marriage will last. Never see the bride before the wedding and, oddly, hope for a spider on your wedding dress – it's good luck. Certainly take care not to drop the rings, as whoever does will definitely die first!

When you are happily married, it's time to buy a house. But guess what? If you're superstitious, you have a whole new set of things to watch out for. Never bring an old broom to a new house or you bring all your old troubles. You should scatter coins in the new living room for financial prosperity (and a mess to clean up). Bring good luck according to Feng Shui by having windows facing the sunrise. Before you spray that Raid, know that black ants frequenting your house are actually considered good luck, as is hanging an empty hornet's nest!

No matter what you believe in, some superstitions are fun possibilities to entertain. Wish upon the first star you see, throw coins and wishes into fountains and always get a good kiss at midnight on New Year's Eve to ensure a year full of love and laughter!