How can you make bread?

There are no records about where bread might have originated, but bread has been around for thousands of years. Rustic breads consisted of grains that were crushed, soaked in water, kneaded into a dough, and allowed to ferment by naturally-occurring yeasts for some time before being baked. Recipes for sour dough bread still rely on these wild yeasts. Loaves of bread buried as funerary offerings have been found in 5,000 year-old predynastic Egyptian graves. The tomb of Ramesses III depicts the bread-making process

in the royal bakery. In ancient Rome, milling grain and baking the dough into loaves of bread was a well-established practice. It was only in 1859 that Louis Pasteur proved that live microscopic organisms caused the bread to rise.

A loaf of bread cannot be made without a leavening agent such as yeast or baking powder. The carbon dioxide gas bubbles produced by the yeast fermentation of sugar or by the chemical reaction of bicarbonate with an acid create holes in the gluten matrix of the dough, resulting in spongy baked products characteristic of bread.

The term "unleavened bread" applies to bread made only from water and flour that is not allowed to ferment, such as matzo (matzah, matzoh, matzoth) crackers. Every year, Jews celebrate Passover to commemorate the Exodus from Egypt by eating unleavened bread as instructed by Moses in the Torah, Old Testament of the Bible (Exodus 12:17-19).

17 Celebrate the Feast of Unleavened Bread, because it was on this very day that I brought your divisions out of Egypt. Celebrate this day as a lasting ordinance for the generations to come.
18 In the first month you are to eat bread made without yeast, from the evening of the fourteenth day until the evening of the twenty-first day.
19 For seven days no yeast is to be found in your houses.

Combine the flour and water and knead 10 minutes. Cut the dough into 16 pieces. Roll each piece into a ball and flatten with a rolling pin on a floured board to form 6-inch (15 mm) circles. Pierce the dough disks with a fork at 1-inch intervals and place on an ungreased cookie sheet. Bake in a preheated 425°F (220°C) oven for 7 minutes or until discs are lightly colored, blistered and crisp.

You can make rectangular matzo crackers by using a pasta machine to produce broad and thin lasagna noodles which are then pierced and baked as indicated above. To make unleavened bread that is kosher for Passover (Pesach, Pessah), the flour must either have a kosher certification from an orthodox Rabbinic court, or the flour must come from grain that has been kept free from water or dampness. Ultra-Orthodox Jews make it a point to use only products made from Shmurah (Shemurah) flour that has been carefully monitored from harvesting to milling and which has been kept absolutely dry and stored in a cool, dark place to prevent any fermentation. Kosher matzo must use spring water that has been allowed to settle overnight in a cool, dark, place. Preparation of the dough and the start of baking have to be accomplished within eighteen minutes because fermentation is presumed to start after this time. All utensils and preparation surfaces must be perfectly clean and kosher for Passover.

Hardtack is an unleavened bread or biscuit made from flour, water, and sometimes salt. It is baked hard, and it can stay edible for years if it is kept dry. It has been used for sustenance during long sea voyages, land migrations, and military campaigns.

= = = = = = Yeast = = = = = =
Yeast is a fungus (Saccharomyces cerevisiae) that metabolizes sugar to produce alcohol and carbon dioxide. Baking evaporates the alcohol and kills the yeast.

A typical yeast bread recipe may contain the following ingredients: 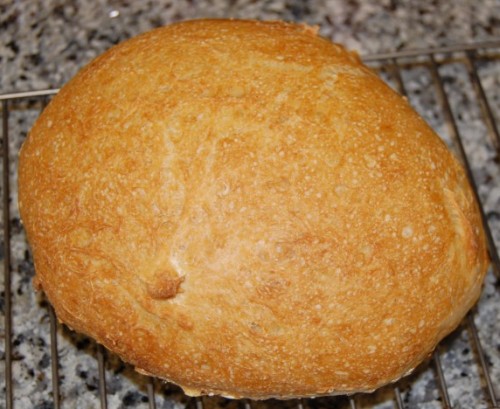 Allow the dough to rise for about 2 hours in a warm place. Shape into a loaf using extra flour to prevent sticking. Pre-heat an oven containing a pizza stone to 450° F (230° C). Place the loaf onto the stone, and bake for about 25 minutes until done.

A crispy crust may be obtained by baking this bread in a closed Dutch oven preheated to 450° F for 30 minutes, and then removing the lid and baking 15 more minutes. See the recipe for sourdough bread for details on the baking procedure.

Dark Mocha Rye Bread Recipe
German Dark Rye Bread and Russian Black Bread get their color from caramelized ingredients like molasses, darkly toasted bread crumbs, or roasted ingredients like coffee and malted grains. Cocoa powder or unsweetened chocolate are also used to impart a dark color to bread. This recipe uses both cocoa and coffee, hence the name "mocha". The recipe produces a dense dark rye bread. A less dense bread may be obtained by using 2 cups of wheat flour and one cup of rye flour instead of equal quantities of each.

Dissolve the molasses and the yeast in the warm water; set aside while you measure and mix the other ingredients. In a large bowl or stand up mixer, combine the bread flour, rye flour, cocoa powder, instant coffee, caraway seeds and salt. Add the liquid ingredients which by this time will be foamy, and stir with a dough hook or large spoon to form a dough ball. Knead well.

Cover the bowl containing the dough ball with plastic and let the dough rise for 30 minutes in a warm place. Shape the dough into a loaf and place it in a greased loaf pan. Shaping the dough removes any large bubbles that may have been formed during the initial rise time. Put the loaf pan inside a large plastic bag, and let the dough rise in a warm place until it doubles in size (1 1/2 to 2 hours). Covering the dough with plastic keeps it from drying out. Bake the loaf for 30 minutes in an oven preheated to 400° F (204° C). Place the baked bread on a rack to cool.

= = = = = = Baking powder and Baking Soda = = = = = =
Recipes using baking powder are commonly used for biscuits and cakes. Baking powders generally consist of sodium bicarbonate (baking soda) and an acid such as calcium acid phosphate. The dry ingredients do not react, but they produce carbon dioxide as soon as water is added. Sometimes, recipes use only baking soda instead of baking powder, but these recipes usually require an acid component, such as buttermilk, that will react with the baking soda to produce carbon dioxide bubbles. Avoid using baking powders that contain acid aluminum salts, like sodium aluminum sulfate, because they may have harmful health effects. Rumford Baking Powder

does not contain aluminum.

Preheat the oven to 425° F. Lightly grease and flour a cast iron Dutch oven and preheat while you make the dough. Sift and combine the dry ingredients in a large bowl. Add the buttermilk to form a sticky dough. Place dough on floured surface and knead lightly. Do not overhandle. Shape into a round loaf. Make a deep cross through the center of the loaf so that it will break easily into quarters when it is baked. Place the loaf in the preheated cast iron Dutch oven. Cover the Dutch oven and bake for 30 minutes. Remove cover and bake for an additional 15 minutes until lightly browned. Cool the bread on a rack and cover it with a tea towel. Lightly sprinkle water on the cloth to keep the bread moist.

Yellow Cake Recipe
Cakes are normally sweet and use eggs. The baking powder creates bubbles in the batter and the protein in the eggs retains the structure when it becomes firm during baking.

Preheat oven to 350 degrees F (175° C). Butter and flour 2 (8- or 9-inch) baking pans. Sift together flour, baking powder, and salt into a bowl. Beat butter and sugar with an electric mixer until pale and fluffy 3 to 5 minutes. Beat in eggs, one at a time, then vanilla. Continue beating for 5 minutes. Mix in one fourth of the flour mixture and one fourth of the milk at low speed, repeating four times. Mix until batter is just smooth, and spread evenly in pans. Bake 20 to 25 minutes in the middle of the oven until the cake starts to pull away from the sides of the pan, and a wooden toothpick inserted in the center of the cake comes out clean. Cool 5 minutes in the pan, then invert onto a rack to cool completely.

In a large mixing bowl, whisk together the flour, baking powder and salt. Cut in butter with a pastry cutter until there are crumbs the size of peas. Add cold milk and stir it in with a fork. Knead the dough gently about 15 to 20 times. Handle as little as possible to make light, flaky biscuits. Put dough on a floured cutting board. Roll the dough to a thickness of about 3/4 inches (2 cm). Cut into rounds with a biscuit cutter. Place biscuits on an ungreased cookie sheet. Bake in an oven preheated to 400°F for 12 to 14 minutes, until edges begin to brown.